On Being the Parent of an Excellent Grown Up

Today marks the crossing of a very important threshold in my life. My son Reuben is setting out in his first international tour, as one of the members of the excellent Melbourne based band RVG. In my scheme of things, this equates to a graduation, and I feel both deeply proud of him and full of nostalgia for the many tours that we did together when he was a kid and a teenager.

I’m filled with layers and layers of complex emotions. A huge part of me wants to be there to greet him and his band members when they first land in Los Angeles, but of course, that’s exactly what I shouldn’t do! Finding that balance between providing deep and genuine support, and stepping back far enough so that our kids can carve their own path in the world is every parent’s dilemma.

Reuben has always shared my love of music. At the age of two he got his first drum kit, then a djembe, then guitars and banjo and accordion and piano. From the age of about five he’d sometimes sit in on my gigs, playing whatever instrument happened to be his latest obsession. Here’s a pic of us at the Wolfgang’s Palace Beltaine Festival  (Colac, Australia) – it must have been back in about 1997 or 98… 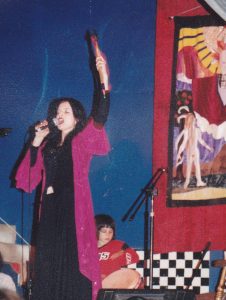 And then, in 2001, just before his 9th birthday, we set off together for my first world tour. We were both as wide-eyed as each other – seeing England for the first time, then flying into the USA via New York City. It felt like a Fairy Tale, witnessing that mythic city emerge as we descended below the clouds. The Chrysler building, the Empire State, the Statue of Liberty – they were real! We shared our first lime green Springtime together at the Rites of Spring festival in Western Massachusetts – so different from the muted grey-green of the forest of home. We even made our way to New Mexico on that first trip, and I knew straight away that the Land of Enchantment had captured my heart. Each year, for the next eight years, I’d take Reuben out of school for three months and we’d go travelling the world together. We’d make friends and sleep on couches and camp at festivals and follow the path of adventure. It was an incredible experience and privilege for which I am deeply grateful. 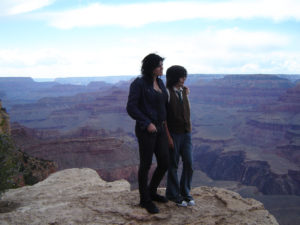 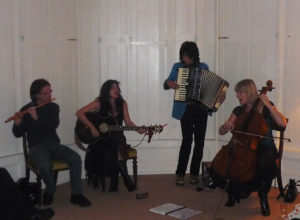 (And here we are a year or two later, at a house concert in London with Rachel and Roger)

And now, he’s about to embark on a whole new adventure! If I’m to be totally candid with you, then I must admit that hidden deep within the layers of pride and excitement and deep satisfaction that my child has found a path in life that really does bring him happiness, is a little seed of sadness. I miss those adventures together.  I want to be there witnessing RVG play SXSW in Texas,  I want to be cheering them on from the audience at their NYC show. But I know I’ve got to give him space to experience this important threshold in his own way, with his peers and colleagues – doing things that 25 year olds do when their Mum isn’t around!

Every culture has their rites of passage that mark the transition from child to adult.  Sometimes these are obvious – a hero’s quest, a solitary time in the wilderness, a ritual of endurance, a community celebration. But in our (primarily) secular Western Culture, these rites have become watered down, diluted versions of true mythic thresholds. Sure, we have our celebrations at 18 or 21, and we can drive or vote or drink etc, but the honour of achieving these privileges occurs simply because we’ve crossed a linear age marker. More often than not, we aren’t given a chance to truly prove that we have earned the right to be called ‘adult’. Given the lack of firm ‘rites of passage’ in our dominant culture, the best thing that we can do is to make our own. Somehow I feel that for Reuben this tour will be such a rite – a firm marker between before and after. I certainly regard it as such. It’s a threshold for me, too, another trial in the ongoing process of letting go.

I find it interesting that these ‘empty nest’ feelings are surfacing for me again. It’s been six years since I moved out of our Melbourne home, passed the keys over to Reuben, and set out with Tim to travel, and eventually to set up our home in the USA. Of course, I go back to Australia regularly, and Reuben comes and visits me here, so we get lots of focused time to hang out together, but I regularly feel an emptiness and sadness at being apart from him. It’s good and it’s natural that there should be lots of supportive space between adult kids and their parents, but inevitably I have that sweet, sad, nostalgic feeling of waving goodbye from the shore. Maybe the empty nest feeling never goes away? Maybe my folks felt that when I moved overseas at the age of 45! Maybe this particular threshold for Reuben carries so much weight for me because it brings back so many sweet memories of our own International adventures.

The compromise that I made with myself is to be there for his final show of the tour in Los Angeles. That way he has a month of touring behind him, and a whole heap of stories to share with me. Tim and I are flying over to LA  for a couple of days couple of days to see RVG play on March 28th, then catching the train back home to New Mexico in time for the next Full Moon Magic concert on March 31st. It’s a crazy indulgence, but I know we won’t regret it.

If you’re interested in checking out RVG, here’s a link to a cool article with video links.

And if you want to see something pretty cute, check out 6 year old Reuben on my Full Moon in Scorpio film clip back in 1998.  He sang backing vocals 🙂

Thanks for reading. I’d love to hear any feedback. You can write to me here: wendy@wendyrule.com