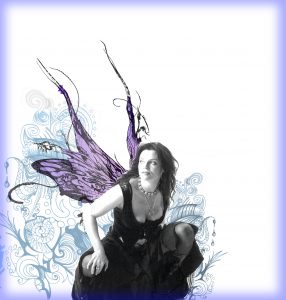 I’ve just returned from a trip to Faerieland – in this instance the wonderful New York Faerie Festival in upstate New York. And there, in the spirit of make-believe, I witnessed people of all shapes and sizes and ages leave behind their everyday world and slip through the veil into a dress-up fantasy land of Magic and wonder. It’s a terrific three-day adventure in beautiful woodland (I even saw a bear on my first night there, wandering at the edge of the still-quiet campground!), with music from four different stages drifting through the summer trees, mingling with the sounds of laughter and play. People don faerie wings and sparkling gowns, dress as trolls and elves and gnomes, juggling, blowing bubbles, dancing around the all-night fire, and most importantly, suspending their disbelief. 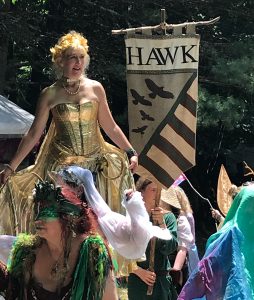 I’ve attended many such Faerie Festivals over the past fifteen years or so – in Cornwall and England, Oregon and Maryland, Pennsylvania and New York – and each one offers its own interpretation of Faerieland. You might wonder why I’m drawn to perform at such seemingly frivolous and lighthearted events – especially when I’m best known for my musical journeys into the Underworld realms. Well, the thing is, I just love faeries, and I always have! And although I know that dressing up in faerie wings doesn’t make one a faery, the very act of make-believe is a great reminder that Magic is ever present, and very real.

Since I was a child I have felt a special connection with Nature and an awareness of unseen energies. As a kid, I would seek time alone in our overgrown suburban Melbourne backyard so that I could secretly sing to the ‘fairies’, as I knew these energies back then. I realise now that I was putting myself in a shamanic style trance, making up melodies and singing myself into connection with the great unseen forces of the Universe. It was very natural, and the presence of (mostly) unseen beings was real and tangible. I experienced many of the classic ‘out of the corner of my eye’ visions of the Fae, and whenever I sat quietly in Nature, I felt them around me.

Thankfully my mother was very supportive of her weird and tripped out daughter! Before they were easy to find, she sought out books about fairies to gift to me. One of my most treasured books, which I received for my 4th or 5th birthday,  was ‘A Child’s Garden of Verses’, by Robert Louis Stevenson. It was a collection of poems, and a few of them had beautiful illustrations of Faerieland. (check out those Faeries down the bottom right-hand corner. I became quite obsessed with them!) 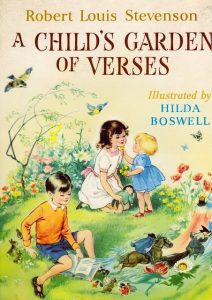 Here’s one poem that I remember by heart. It’s called “Fairy Bread”.

Of course, this book (as well as the many Flower Fairy books that Mum gifted me as a kid) fed my imagination and gave form to my formless images of strange Magic and hidden beings. And an additional bonus was that these books sparked my love of poetry and rhyme.

Before long – I guess around the age of 10 or 11 – I’d progressed onto Brian Froud’s and Alan Lee’s incredible book of Faeries. Things suddenly got darker, and stranger, and much more serious. Not only was the book filled with beautifully unsettling images of faeries good and bad, but also genuine folk tales and myths. 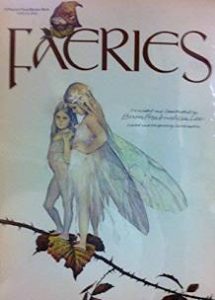 This was the real deal, and it set me on a course of study into Magic, Faerie, and mythology that continues to this day. I’ve genuinely encountered faeries – in dream, in ritualistic trance, and occasionally when I’ve journeyed on Magic Mushrooms. I have no doubt of the reality of their being. So many cultures, all across the world, have stories of unseen, magical beings – both benevolent and malevolent. There are the Piskies of Cornwall, The Tuatha de Danann of Ireland, the Huldufólk of Iceland, the Selkies of the Orkneys, the Nymphs of Greece, the Elves of the Germanic lands. Many Native American tribes have stories of ‘The Little People’. With beliefs in magical beings so widespread, surely this indicates that they are not merely a figment of the human imagination?

Wherever I am in Nature, I make sure that I say ‘hi’ to the Wee Folk – even if I don’t know who they are! When I went for a walk up into the desert hills this morning, I sat for a while in the shade, breathed deeply and connected with the land, and said a simple hello to all unseen beings there. It’s my way of connecting to Place. 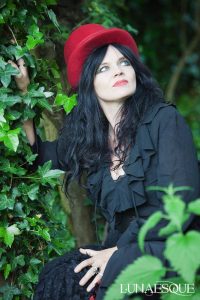 For many years, when I lived in Melbourne, I held an annual Midsummer Faerie Ball. It was a musical and magical evening open to adults and kids – a chance to dress up and honour the time of the year when (as Shakespeare well knew!) the veil between our own world and that of the Faeries is thin. It was great fun – a chance to let our childlike imaginations run wild. And it was more than just fun, too. I always included a sacred ritual in honour of the land and the unseen spirits that inhabit it.

So, when I get along to a Faerie Festival like New York Faerie Fest, I’m doing more than just dressing up. I’m witnessing a longing for connection that humans have with Fae, and our funny, creative, sometimes awkward, definitely gaudy way of showing our respect – just like my friend Paul and I were doing last weekend 🙂

Become a Patron, starting at $2 a month, and enjoy: